Explore the characteristic village of Narni and admire the amazing views over the enchanting Gola del Nera and the Conca Ternana. Our expert guides will show you the most symbolic and charming places in this pretty little Umbrian village.

We will begin sightseeing in Narni by exploring Piazza Garibaldi, formerly called Piazza del Lago and its underground passages, which contain an early-medieval Cistern under the fountain situated in the piazza, the so-called Lacus. We’ll visit the Concattedrale di San Giovenale with its four beautiful and majestic aisles and its altar with canopy; don’t miss the early Christian shrine in which the patron saint of Narni, San Giovenale, was buried. We will also see Palazzo dei Priori, located in the piazza of the same name and re-imagine the past in the spot that housed the ancient Roman forum. Looking at the Palazzo you’ll not only appreciate its portal, the loggia designed by the architect Gattapone and the loggia ‘del banditore’ (auctioneer), but all the other decorative elements that make it such a beautiful and noteworthy building. Still in Piazza dei Priori, we will stop in front of the Palazzo Comunale (Town Hall) with its imposing stone facade, adorned with friezes, sculptures and bas-reliefs, and a beautiful and wide atrium made out of one of the towers that composes the building. For many years the Town Hall’s Sala del Consiglio housed the ‘l’Incoronazione della Madonna’ (The Coronation of the Madonna), the masterpiece by Ghirlandaio which is now exhibited in the Museo di Palazzo Eroli. You’ll also like the Chiesa di Santa Maria Impensole, which is said to stand on the site of an ancient temple dedicated to Bacchus and has an ancient facade decorated by a portico and friezes depicting symbolic elements such as a lion, eagle, lamb and peacock which decorate the entrance portal. Its internal structure exhibits much more sobriety but still has a number of ancient frescoes.

Narni will provide you with numerous beautiful medieval views and its pretty little alleyways are a delight. Finally we go in search of Underground Narni with the fascinating crypt of the ancient underground church of Santa Maria Maggiore, with its apse with the altar situated in the ancient Convento di San Domenico. You will also be able to see the great Sala del Tribunale dell’Inquisizione known as the ‘Stanza dei Tormenti’ (Room of Torments) where interrogations took place and another room that that was used as a cell where inmates were imprisoned. On the walls of this room you’ll be able to see numerous graffiti with codes scratched out by the prisoners during their gruelling imprisonment. Underground Narni is a fascinating experience whose secrets are still being discovered: in the former church of San Domenico a beautiful Byzantine mosaic was recently discovered dating back to the 6th century. 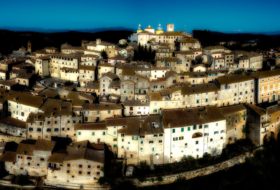 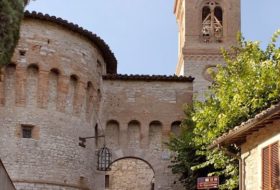