Choose the beauty of Cascia on the Colle Sant’Agostino, the Umbrian village known as the focal point of the life and works of St Rita. In the company of our qualified guides you’ll explore the lively hilly territory of the Valnerina and upon your arrival a statue of St Rita will welcome you into the village, which was an important political, cultural and economic hub in the past.

Your tour will begin with the Collegiata di Santa Maria, also known as the Chiesa di Santa Maria della Visitazione. There are two large portals on the outside of the building, while inside it is simple but elegant in style and houses numerous works of art. The next church, the Chiesa di San Francesco, has an external facade with a lovely large rose window and a large portal, while inside you can admire numerous frescoes, including a painting depicting ‘L’Ascension’ (The Ascension) by the famous Niccolò Pomarancio.

In the highest part of the village is the characteristic Santuario di Santa Rita, where you can observe and venerate the body of the Saint, kept in a precious crystal case. Attached to the basilica is the ancient Chiesa della Beata Rita: you will be astonished by its interiors, which are mainly decorated with bright and colourful frescoes.

We will also see the Monastero di Santa Rita, where the Saint died at the age of 76 and the Chiesa di Sant’Antonio Abate, with its numerous, glorious cycles of 15th-century frescoes.

To conclude the tour of the village of Cascia we’ll see the interesting 17th-century Palazzo Santi, currently home to the Museo Civico. Inside you will find archaeological remains and works of art that have played a prominent role in Cascia’s past. 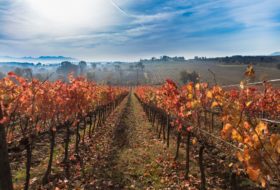 Explore the city of St Rita, a spiritual journey in a village surrounded by nature Choose the beauty of Cascia on the Colle Sant’Agostino, the Umbrian village known as the focal point of the life and works of St Rita. In the company of our qualified guides you’ll explore the lively hilly territory of the […]